Warning: Declaration of SLB_Themes::_options() should be compatible with SLB_Base::_options($options_config = NULL) in /homepages/33/d397907438/htdocs/itsawildelife/wp-content/plugins/simple-lightbox/includes/class.themes.php on line 36
 Wedding Planning | It's a Wilde Life 
Warning: Use of undefined constant JETPACK__VERSION - assumed 'JETPACK__VERSION' (this will throw an Error in a future version of PHP) in /homepages/33/d397907438/htdocs/itsawildelife/wp-content/plugins/jetpack-sharing/sharedaddy/sharing-service.php on line 442


We never had a conversation–it was just a given that my mom and I would DIY my wedding. We are crafters. It’s just in our blood. Also, years of scouring wedding blogs and designing wedding stationery just does that to a person. I’m not sure how long after my engagement was announced I started “pinning” ideas, My mom literally went through my Pinterest board and researched and printed resources to make each centerpiece idea I had mentioned. That’s no small feat–I had at least a dozen ideas. So what did I decide on? As confusing as it sounds, it was a mixture of all of them and none of them at the same time. Huh?!

You see, matchy-matchy is not my thing. Some say it’s a good thing, other’s say it’ bad. I decided each table would have a different combination of bottles+dried wild flowers+other miscellaneous rustic themed items. In that sense, each table’s centerpiece was different from the rest. However, they were all grounded with a bottle or jar with wild flowers. So they were all the same. Huh?! I know, my head’s spinning too. But really–it’s true!

Best part is–we had most of the items on hand! My mom and I joke that her life of  collecting decorated my entire wedding reception for a relatively low cost. Thank’s mom! 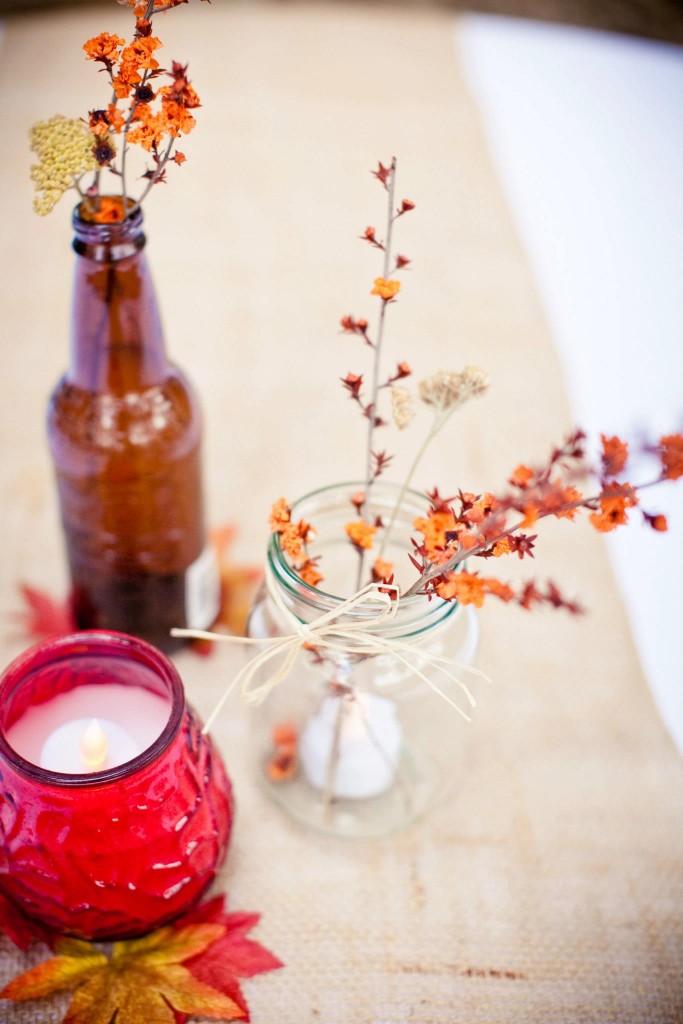 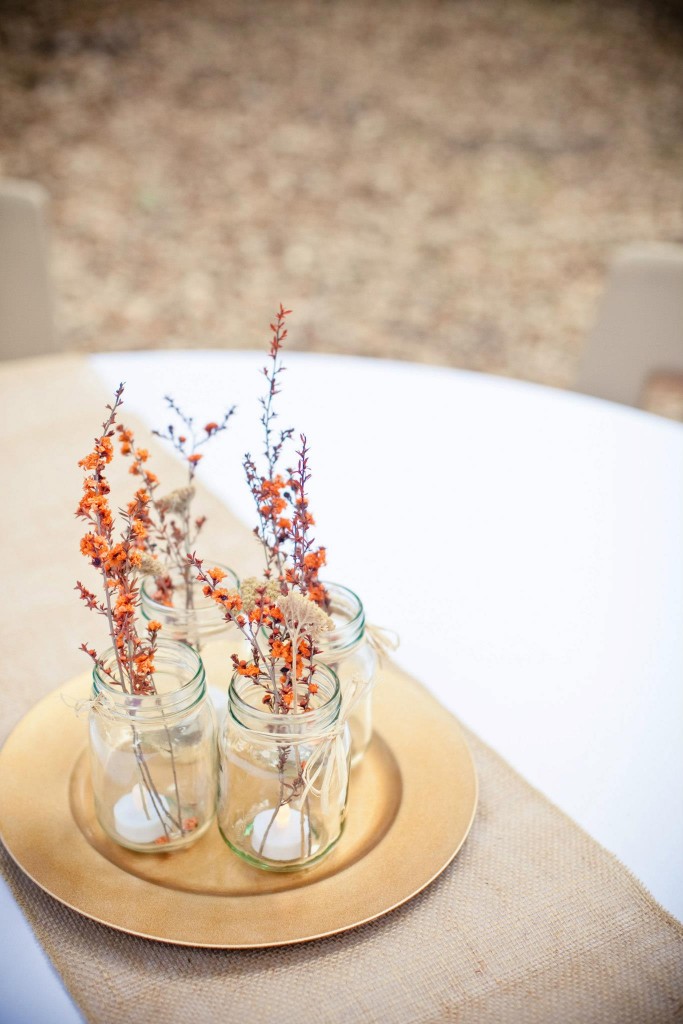 One of the most exciting things about marrying into the Wilde family was becoming an Aunt! Here’s how we kept those kiddos entertained and occupied during our wedding reception–a coloring table that was covered in paper for them to make their mark on. 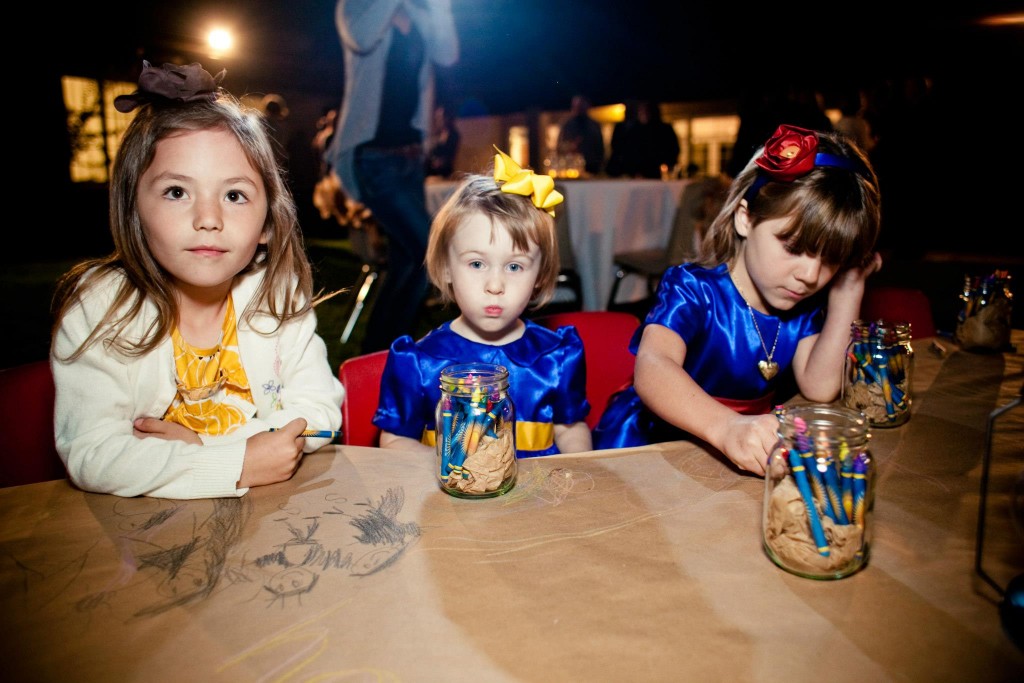 It also didn’t hurt that we were outside so they could burn off some steam…and climb a tree?! 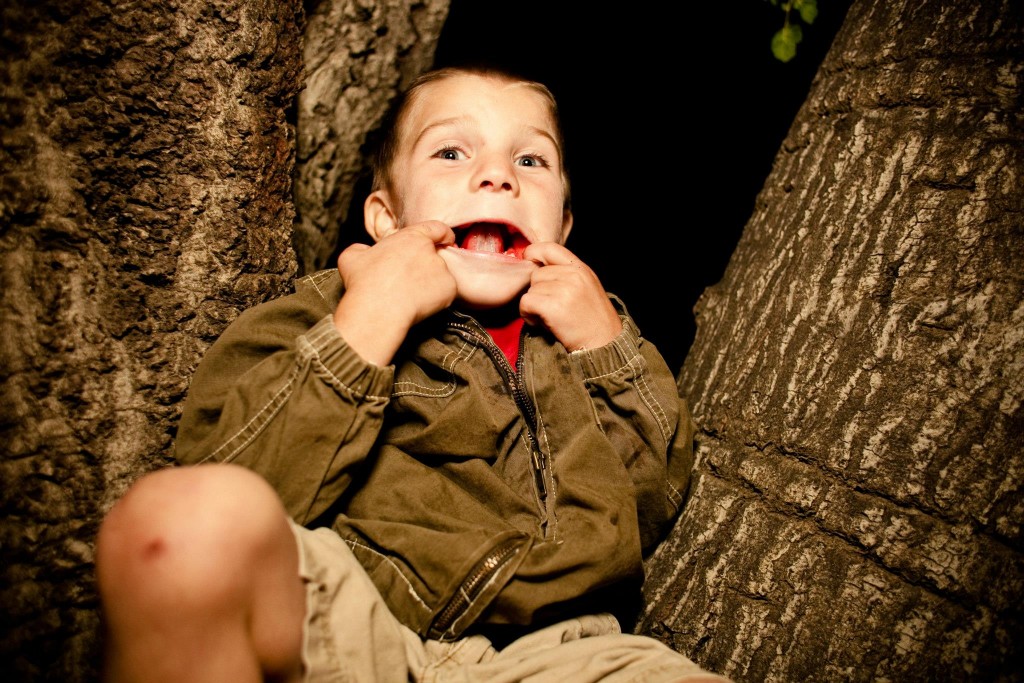 A few more of my favorite ways to keep the kids involved and having fun are custom coloring books, goodie bags and snacks. Kids are going to be kids, there will be a tantrum or two, but don’t sweat it, the kiddie table is always the best place to be! 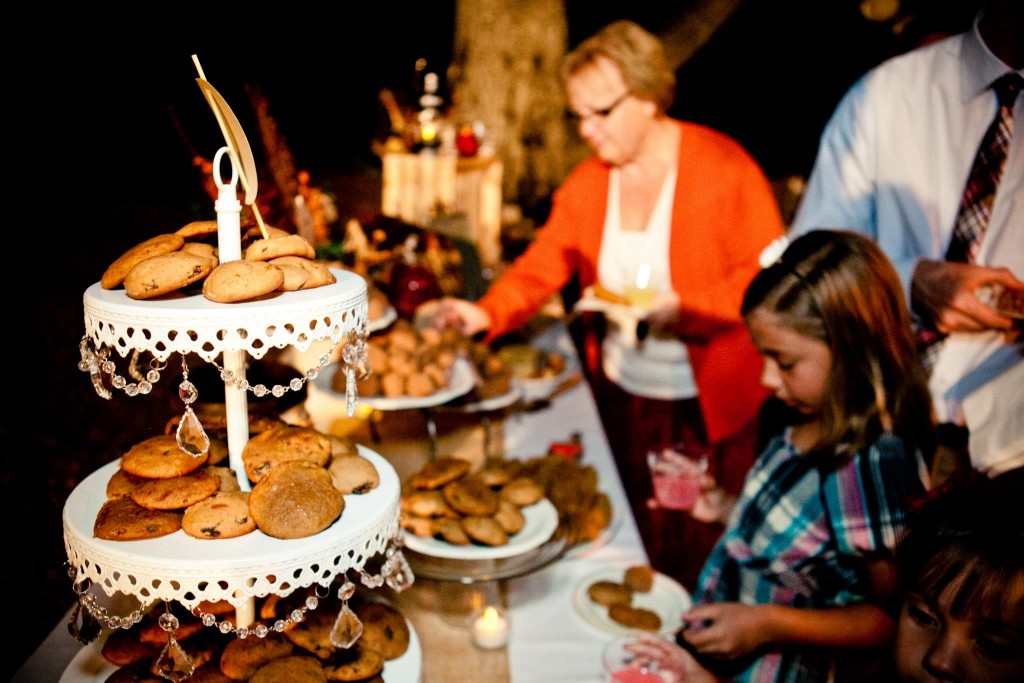 Planning our wedding was surprisingly contentiousless…until it came down to planning the food. I’m not saying that punches were thrown or names called, but being the food-lover that he is, Seth wanted to make sure his voice was heard when it came down to the food that was served at our wedding reception. I don’t blame the guy. He barely had a say in anything else, so this is where he took a stand. Seth loves savory…and I love sweet. We both agreed that given the scope of our reception that a sit down dinner was out of the question. Finger foods were decided on.

We consulted with some party-planning-extrordinaire-friends to decide on quantities, bringing us back down to earth in realizing that the sausage-stuffed mushroom caps, bacon-wrapped asparagus and bagel bite menu Seth was crossing his fingers for just wasn’t going to happen. You see, when the heavens parted and our perfect venue of an oak tree grove descended, there were so many things I overlooked. The lack of electricity and the inability to use fire were two of those things. How on earth would we keep Seth’s savory food choices warm for two-plus hours? Unfortunately, it really would be more trouble than it would be worth.

Why am I sharing this? First, to show that I wasn’t a bridezilla and I let Seth voice his opinion on at least one part of the wedding planning process–even if he didn’t get exactly what he wanted. But mainly to show that compromise is key! So we couldn’t do the savory menu items that Seth preferred, but we sat down and came up with a list of favorite sweet treats for the both of us–none of which needed electricity or fire.

We wanted every part of our wedding day to have some sort of meaning to us–even the food we served. We each chose our favorite candies, baked goods and family recipes that fit the fall harvest theme. Let’s be real, I couldn’t have MY wedding be donut-less, so you better believe I made an order at my favorite donut shop. All of the food–with the exception of the donut holes and candy–were homemade by my mom, mother-in-law and myself. My bestie even made our cake, designed after this one. Going with the harvest theme, our sweet friends made mini caramel apples, which I still hear people raving about to this day.

Even though I didn’t even eat any of the food at our reception, compromise never tasted so sweet… 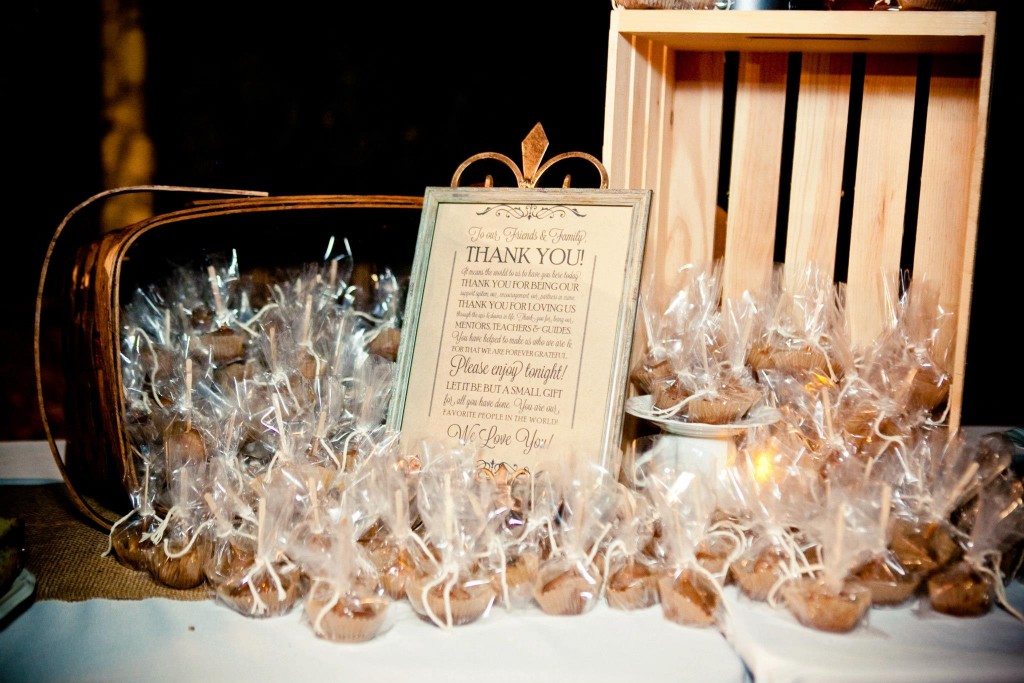 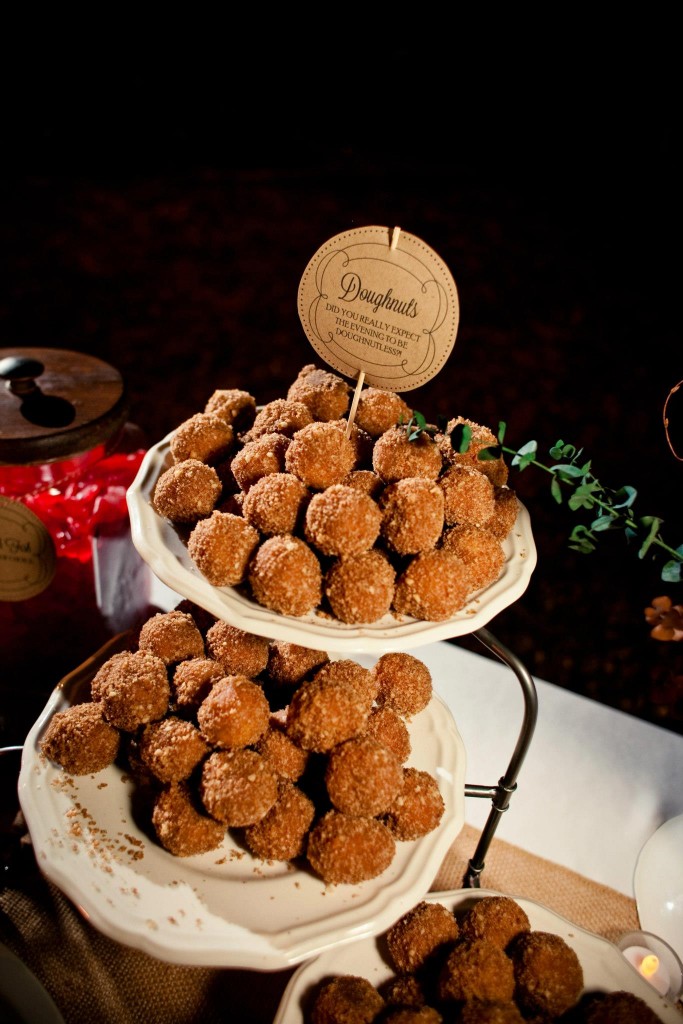 Just because I love you so, here are a few basic recipes: 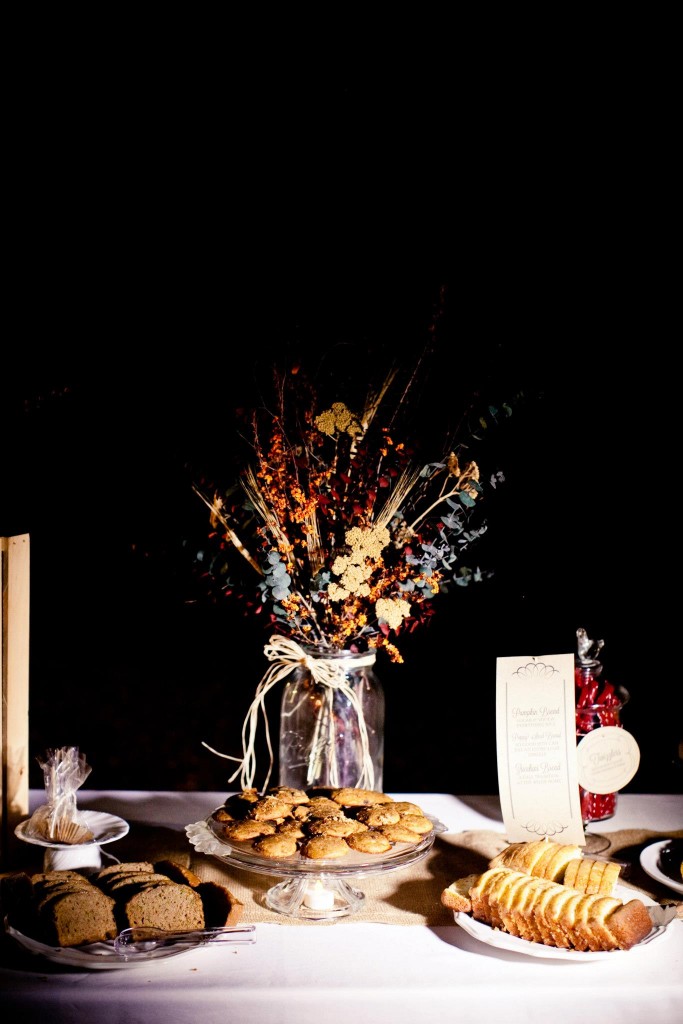 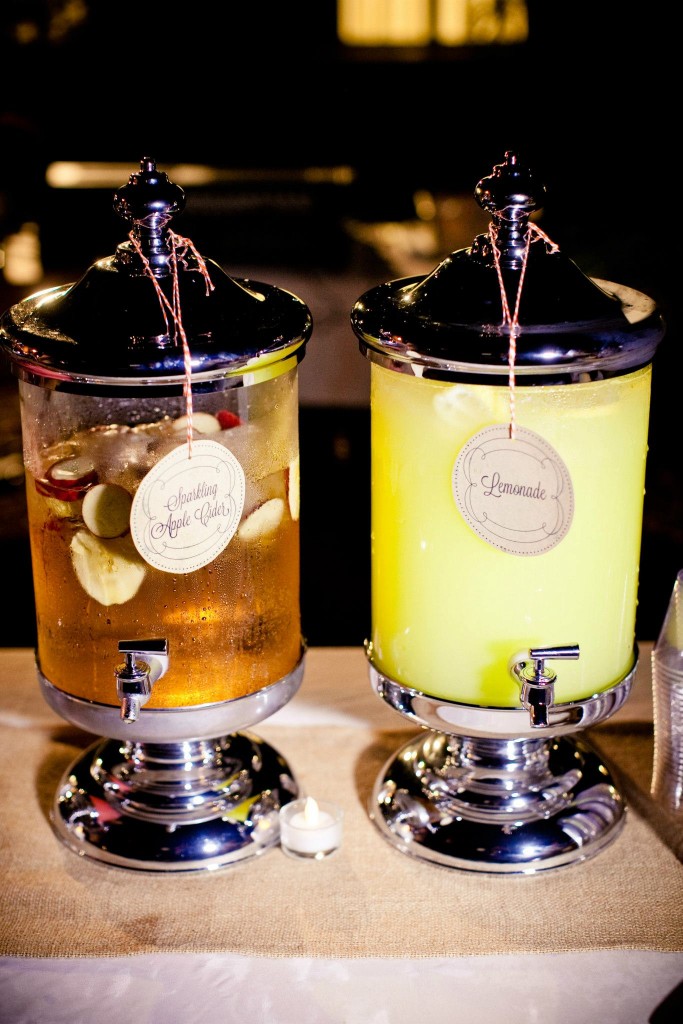